CLOSE ANALYSIS OF WORDS AND IMAGES

Let’s begin by reviewing Scott McCloud’s Ch. 6 of Understanding Comics. This chapter in particular is where McCloud discusses the different kinds of interrelationship that words and images can share.

Here is a PowerPoint of the whole chapter: McCloud Ch. 6 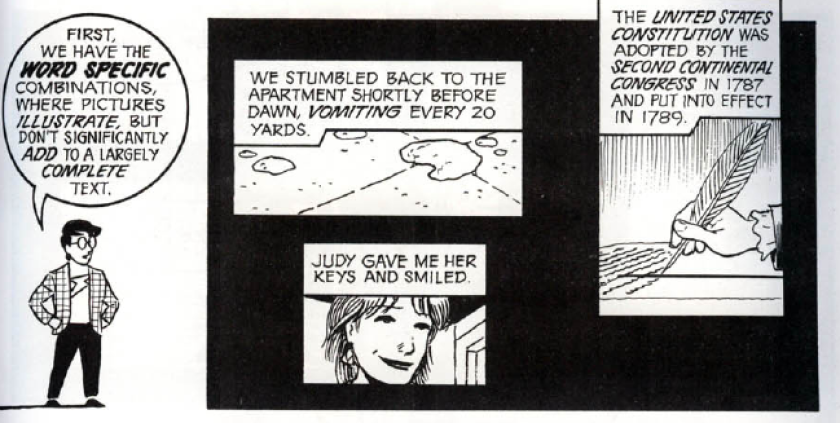 Word Specific basically relies on the words to tell the narrative while imagery acts as a kind of ornamentation.

Picture Specific is the inverse of Word Specific. Here the use of words acts as ornamentation to the imagery or pictures that are conveying the actual narrative. 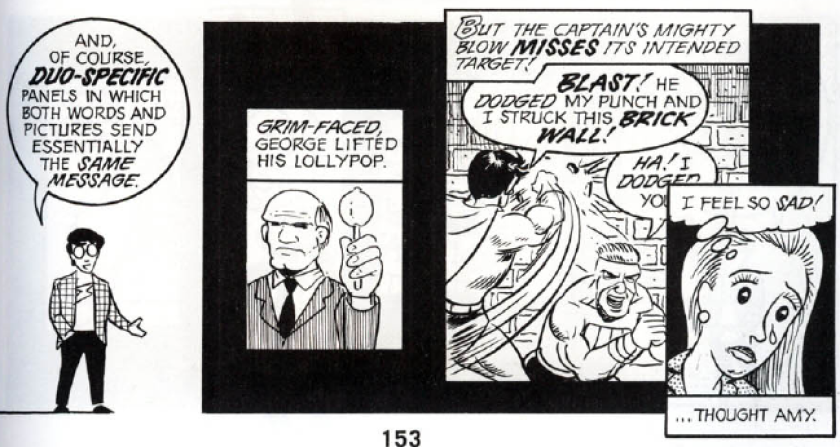 Duo-Specific acts as a situation where words and images are complimentary to one another in the fact that they basically convey “the same message.”

Additive is where the words serve as a means of amplifying or elaborating on the image that is communicating the narrative.

Parallel demonstrates a situation where the words and images appear to be conveying “parallel” but separate narratives. This can be more easily identified or isolated often times when one is only shown a page or panel or two of a comic or graphic novel without knowing the entire context. It can also represent some esoteric storytelling too.

Inter-Dependent is noted by McCloud to be the “most common” combination. This is where words and pictures/images convey different meanings separately but in combination convey a meaning that neither has without the other.

Here are some random selection of images that I have put together from digital graphic novels that I own, mainly from the superhero genre, and I want you to look at each and using McCloud’s definitions, define which combination each image appeared to embody.

The images I showed the students were selected at random:

Superman: Whatever Happened to the Man of Tomorrow by Alan Moore and Curt Swan and George Perez

Batman: The Killing Joke by Alan Moore and Brian Bolland

Here is what the students came up for as a consensus as combinations after reading McCloud and examining the following image: 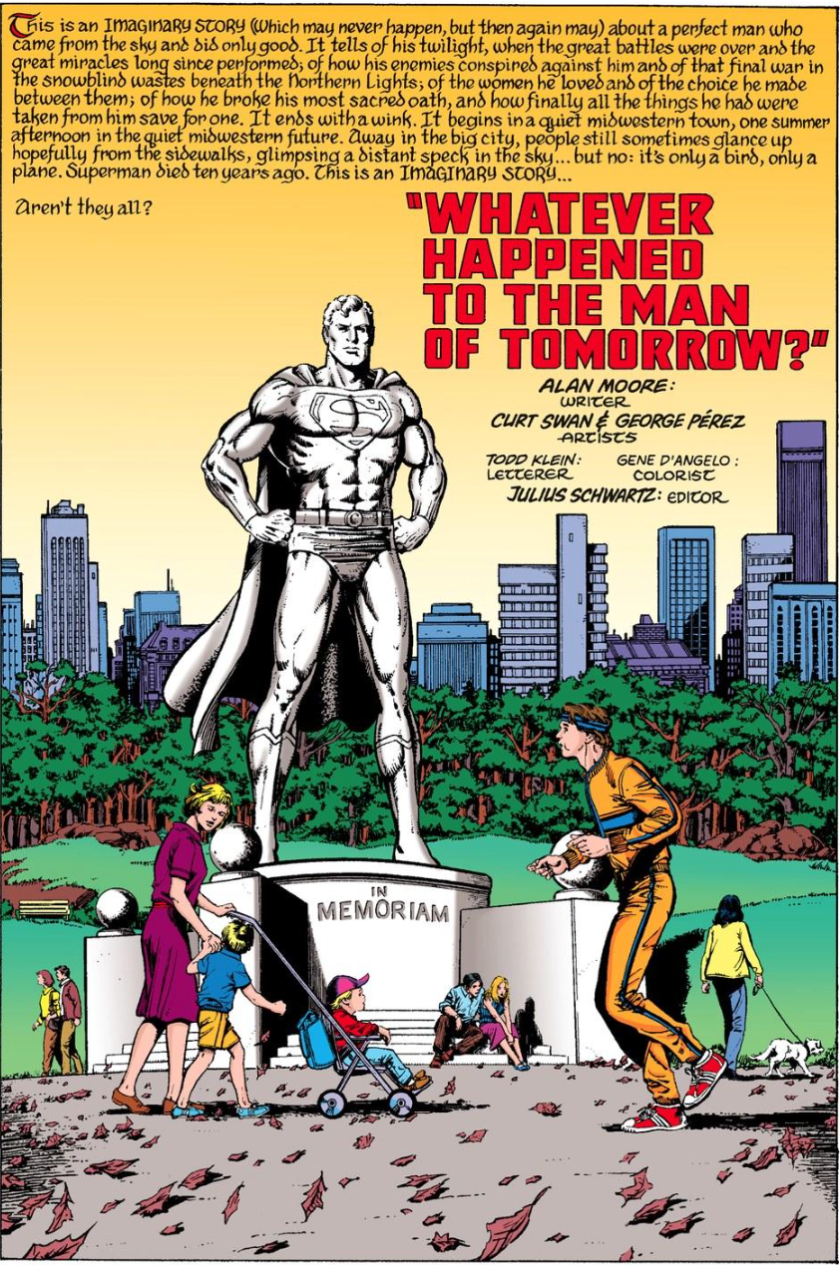 LET’S FOCUS IN A BIT HERE 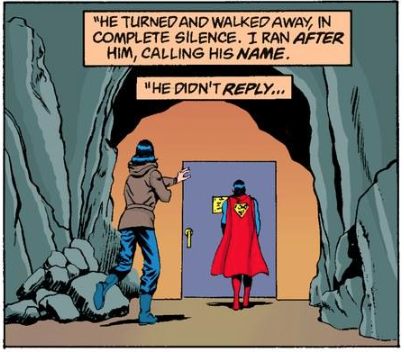 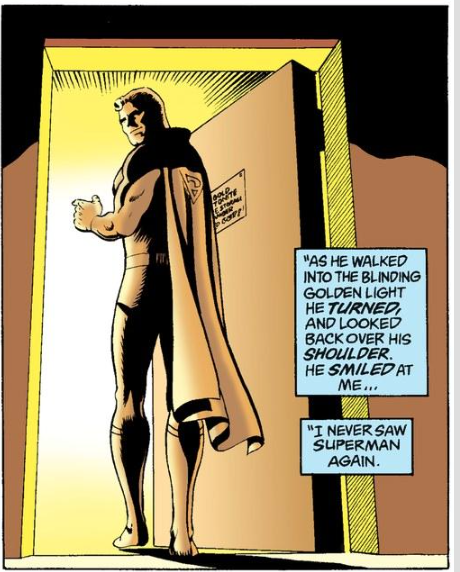 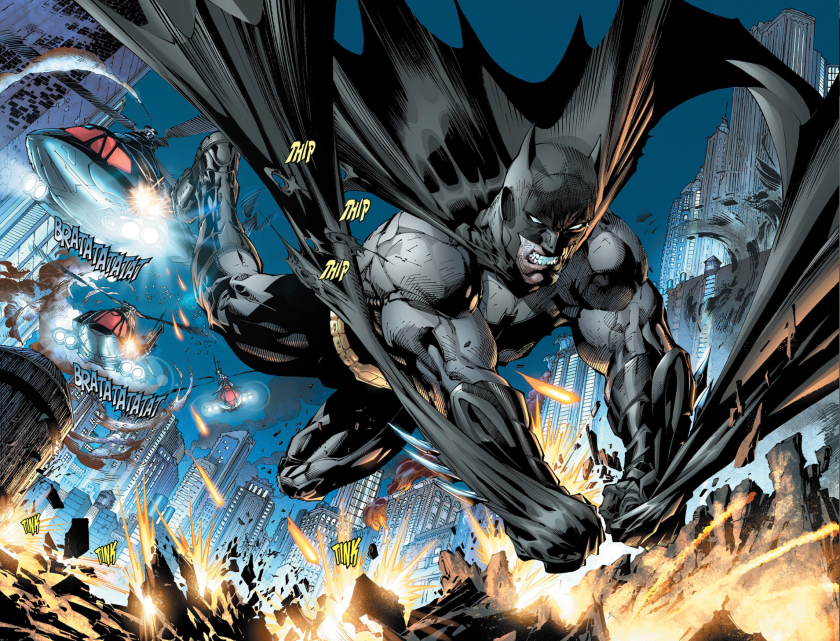 The purpose of this exercise with the students is reinforce and introduce, to expand upon their our perceptions and vocabulary of the combination of visuals and words they are encountering in their readings.

So, with regards to Wednesday and material we are supposed to cover, one thing we are going to review and go over is Report 1: Topic and Rationale for Graphic Novel Paper.

Here is a video walkthrough of the Assignment sheet.

Beneath you will find TWO schedules. The first is for my MWF classes (PW0 and PW4) and the second TTH classes (S36 and WY4).

Monday (1/25): We will look over McCloud’s Understanding Comics Ch. 4 – Time Frames. We will practice our comprehension of this chapter’s content. Discuss tips for beginning research on graphic novels.

Wednesday (1/27): Review Report 1 Assignment sheet and discuss it, review how to use the template for it. Review and discuss McCloud’s Understanding Comics Ch. 6

Tuesday (1/26): We will look over McCloud’s Understanding Comics Ch. 4 – Time Frames. We will practice our comprehension of this chapter’s content. Discuss tips for beginning research on graphic novels.

Thursday: (1/28): Review Report 1 Assignment sheet and discuss it, review how to use the template for it. Review and discuss McCloud’s Understanding Comics Ch. 6

Read McCloud Ch. 7 and 9 for Tuesday.

See you in class. 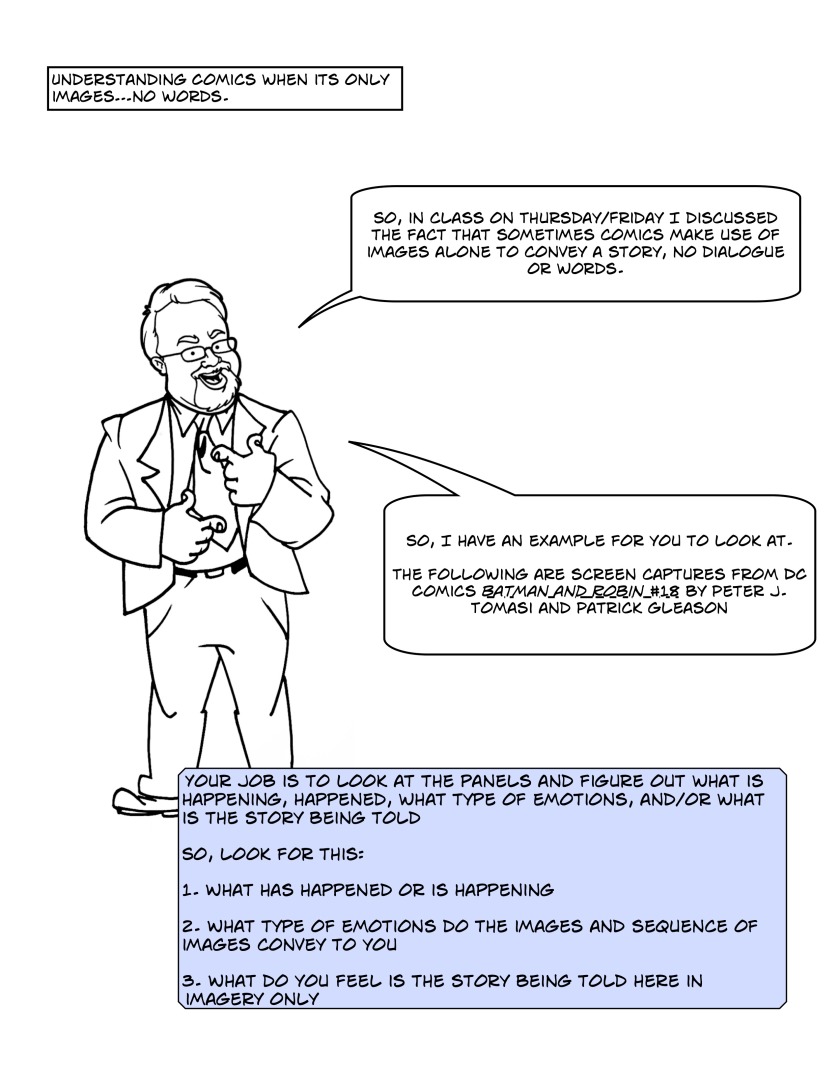 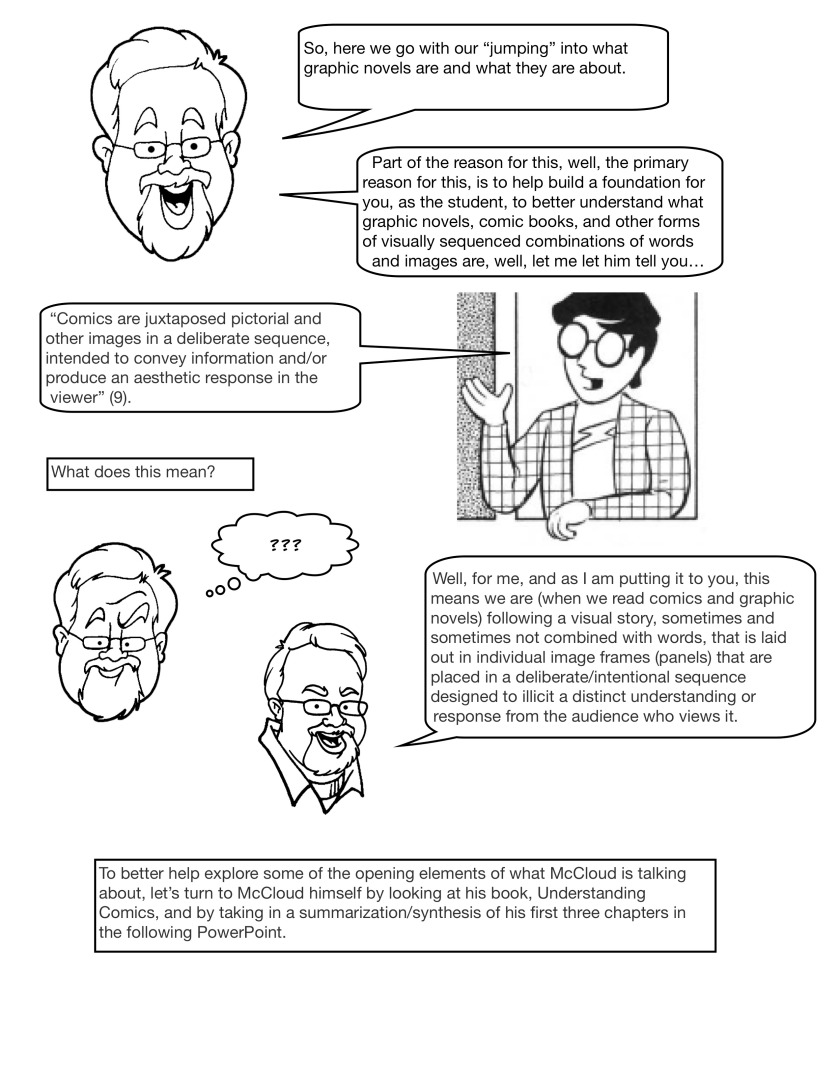 Here is a video lecture of the PowerPoint:

So, for us and this class, it might be helpful for you if we took a bit of a crash course in how to read comics / graphic novels. 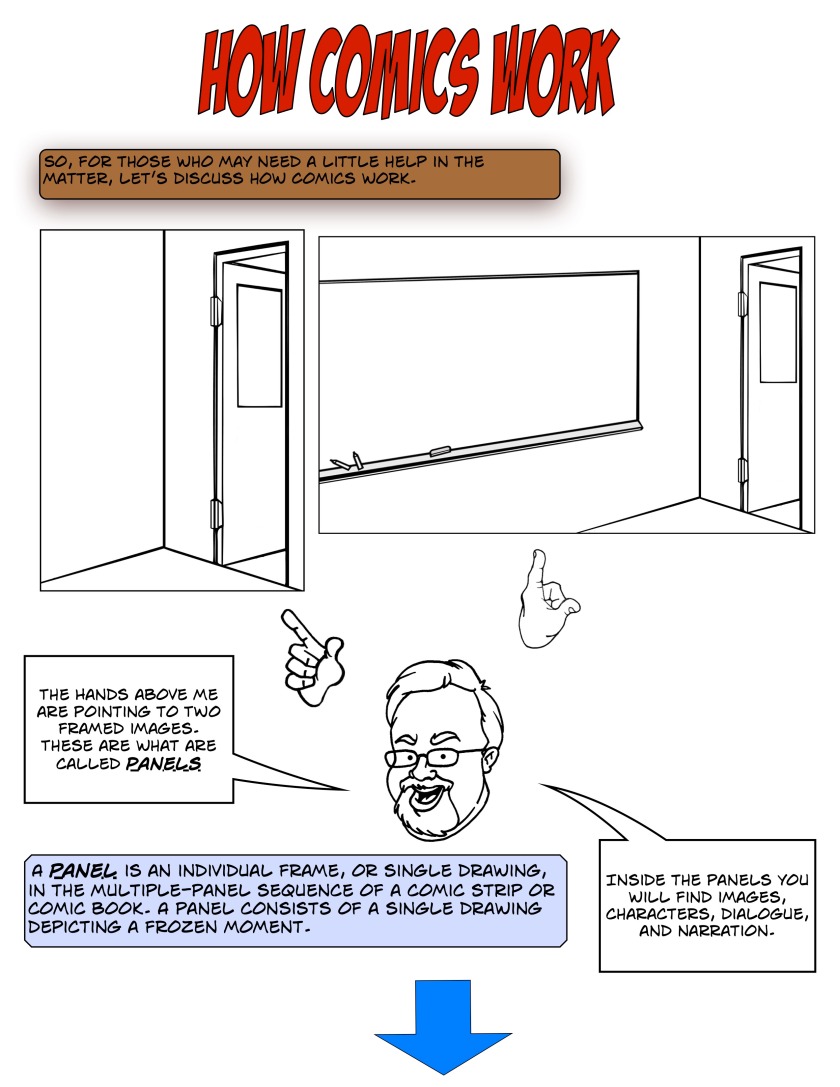 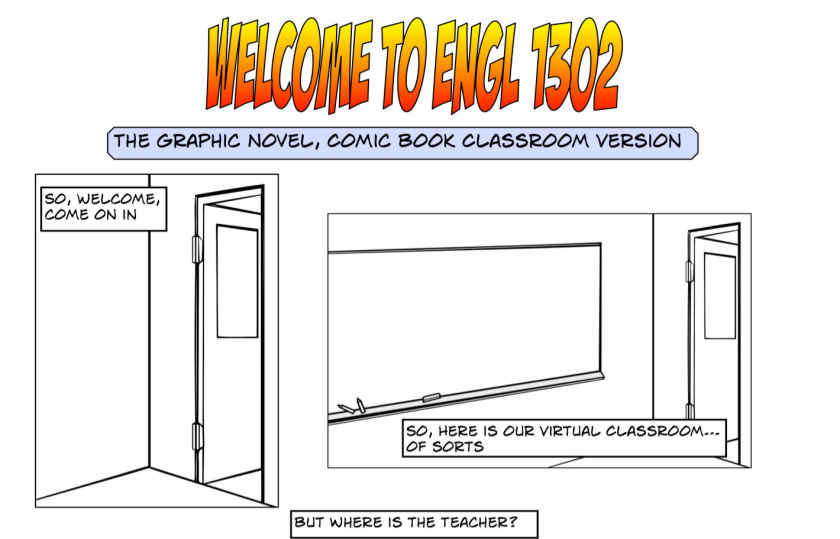 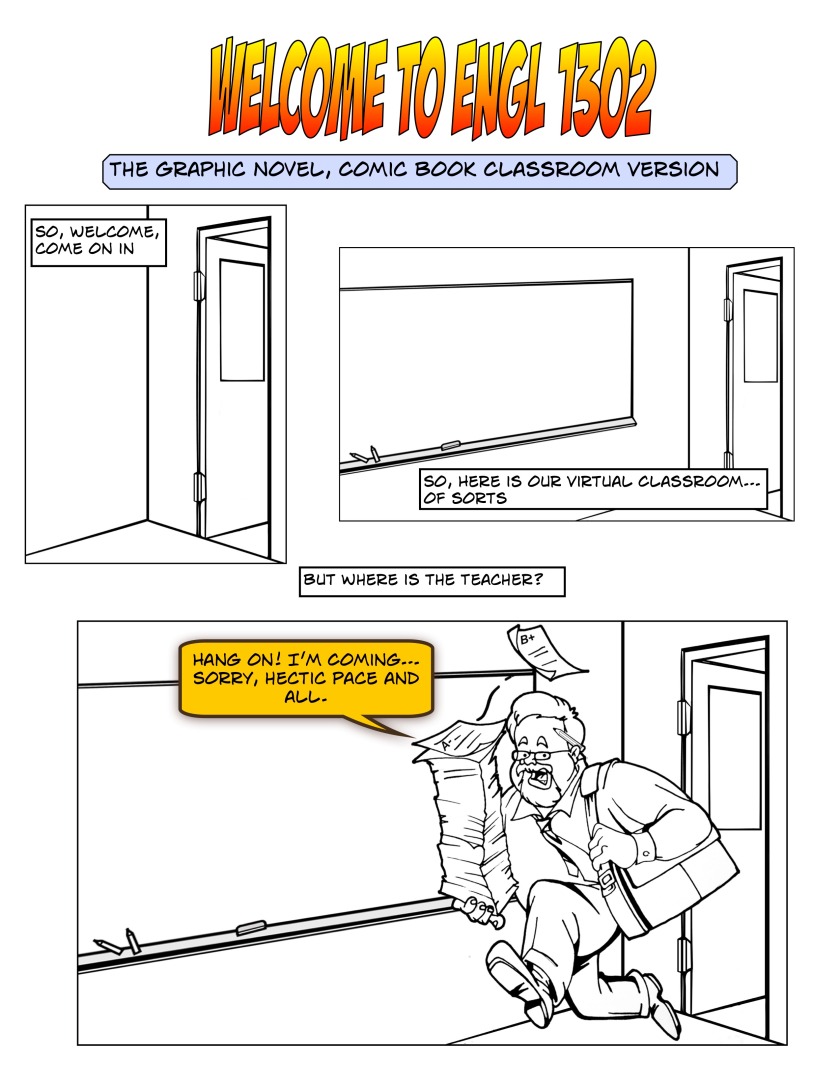 Graphic Novels are becoming more and more a common tool for teaching literature as well as composition.

Many institutions of higher education are using graphic novels as a way to help introduce students, particularly freshmen, to themes and issues that the university wants them to engage in. This is a good thing. College is a place for people to explore and ask questions. However, this has not been without controversy (some of which we will discuss).

For myself, the strong desire to teach this kind of course has always existed.

I am a big fan of superhero comics. This is often what many people think graphic novels are. However, even though I wrote my dissertation on Superman, I will be the first to recognize that graphic novels can represent so much more.

Let me share with you my rationale, the first post I wrote for the first time I taught a ENGL 1302 course with the graphic novel:

Not all comic books are meant for children, the same for graphic novels (often times longer form comic book stories or adaptations of films and literature).

Scott McCloud, in his groundbreaking work Understanding Comics: The Invisible Art, refers to graphic fiction (a catch all term for pictorial representations that tell stories such as comic books and graphic novels) as “Juxtaposed pictorial and other images in deliberate sequence, intended to convey information and/or to produce an aesthetic response in the viewer” (17).

What this means is that graphic fiction are a series of images put together in a particular sequence (with or without words) that cause those who view them to gain understanding of the topic or subject depicted and/or simply to experience a pleasing artistic experience from the viewing.

However, when most people think of comic books or graphic novels, they traditionally think of Batman and Robin, Superman, The Avengers, or the X-Men. Now, these characters do exist in comic books, graphic novels, TV, and movies (and more). But it needs to be considered that these characters can and do communicate ideas to an audience that can be deeper than onomatopoeia sound effects of “Boom” and “Pow.” In addition, comic books and graphic novels can be used to communicate, create, and convey other kinds of stories other than those about superheroes.

People sometimes are unaware of this. So, to help move this forward, here is the catalyst, the rationale that sparked this particular version of the class that you will be involved in:

This is not without pushback, however, there is “good” or relevant pushback (resistance) and there is just “poor” pushback.

A good, recent example of “poor” pushback emerged recently from Crafton Hills College in California. Apparently, and “According to the Redlands Daily Facts newspaper, Tara Shultz and her parents object to Persepolis, Fun Home, Y: The Last Man Vol. 1, and The Sandman Vol. 2: The Doll’s House as “pornography” and “garbage” (Williams). What is odd about this is that there argument is not a strong one as tall. In fact, when one takes into account the professor of the classes response, this becomes a bit clearer. Bartlett responded to an email via the Redlands Daily Facts and provided his reasoning:

I chose several highly acclaimed, award-winning graphic novels in my English 250 course not because they are purportedly racy but because each speaks to the struggles of the human condition. As Faulkner states, ‘The only thing worth writing about is the human heart in conflict with itself.’ The same may be said about reading literature. The characters in the chosen graphic novels are all struggling with issues of morality, self discovery, heartbreak, etc. The course in question has also been supported by the faculty, administration and approved by the board. (Williams)

When one considers Shultz’s response to Bartlett’s, it appears that something does not match up here. Williams article points out that Shultz’s side and reasoning, noting that she

…is working towards an Associate of Arts in English at the public community college, signed up for English 250: Fiction because it fulfills one part of her degree requirements. She was apparently aware that the specific focus of the class was graphic novels, but she told the newspaper that “I expected Batman and Robin, not pornography.” Shultz says that Associate Professor Ryan Bartlett, who has taught the course for three terms without any other complaints, failed to adequately warn students about the books’ content. Her father Greg Shultz said that “if they (had) put a disclaimer on this, we wouldn’t have taken the course.” Tara Shultz agreed, saying that Bartlett “should have stood up the first day of class and warned us.” (Williams)

However, this is not the whole story. Not only may some, including myself, find her statement “I expected Batman and Robin, not pornography” a profound display of ignorance, but apparently, her real aim was a “blow off” class. Consider this information to help clarify:

Of course, Shultz and her parents did have complete information about which books would be covered in the class–the school requires instructors (p. 20) to distribute a detailed syllabus on the first day of the term–and ample time to withdraw with no effect on her grade. Fourteen other courses offered at Crafton Hills fulfill the same degree requirement as English 250. The college’s online calendar shows that the Spring semester began on January 12, and the last date to drop a course with no grade penalty was January 30. Shultz apparently brought up her objections to four out of ten books covered in the class after that date, when her only options were to complete the assigned work or withdraw with a 0. (Williams)

So, what about this, what is the point? Well, the point is that Shultz demonstrated a poor ability to argue. If she wanted to convince me or anyone (truly) that those graphic novels in the course were “pornography” or “trash” she should have perhaps made a more informed, nuance, and critically thought out approach.

I want my students to do something better. I want them to make better arguments. So, this is where we go from here:

I want to have my students approach this and make an argument for/against the inclusion of graphic novels in the classroom. Are they pornography or trash? Are they literature? I want to let you make a case and argue it in an “informed, nuance, and critically thought out” manner.

So, for this course we will read Scott McCloud’s Understanding Comics and you will, in addition, pick a graphic novel from a “reading” list graphic novels to help you engage with the material with my guidance.

Our aim is to engage in real, critical and argumentative debate on the topic. That is our purpose here.